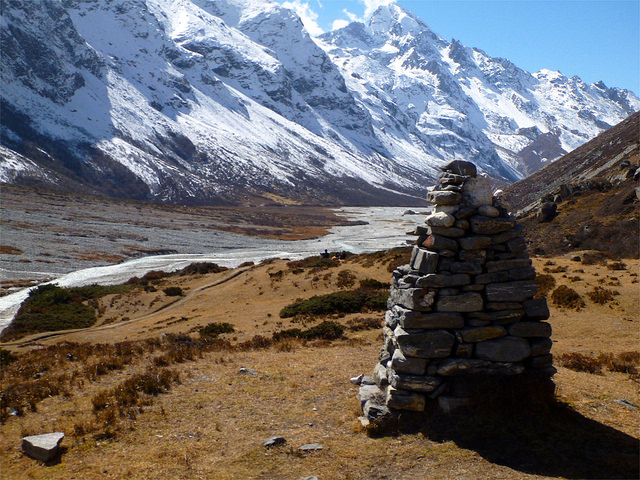 Langtang, Gosainkunda and Helambu, the three major areas are situated in the north of Kathmandu offers a multitude of trekking destinations. Langtang is a narrow valley that lies just south of the Tibetan border. It is sandwiched between the main Himalayan range to the north and a slightly lower range of snowy peaks to the south. Langtang  Lirung(7246m) dominates the valley to the north; Gang Chhenpo(6388m) and Naya Kangri(5846m) lie to the south; and Dorje Lakpa(6966m) protects the East  end of the Valley.
This High and isolated region is inhabited by Tamangs whose religious practices, language and dress are much more similar to those of Tibet than to the traditions of their cousins in the Middle Hills. A visit to the Langtang valley offers an opportunity to explore villages, to climb small peaks and to visit glaciers at a comfortably low elevation.
Trek can be done to the Langtang by returning to Kathmandu via the holy lakes of Gosainkunda at 4300m, or you can make a short trek from Dhunche to Gosainkunda. Thousands of Hindu pilgrims visit the lakes during a full moon festival in August. The lake is also sacred to Buddhists.
Helambu, about 75 km north of Kathmandu, is an area inhabited by Sherpas. You can include Helambu in a Langtang trek, either via Gosainkunda or across the (5106m) High Ganja La.

Langtang – Gosaikunda is the nearest trekking region from Kathmandu. This trek combines the remote and spectacular valley of Langtang, with the high mountains, and...

The Helambu trek is the best trekking cultural trail which lies near by the Kathmandu. The main inhabitant of the helambu region is the Hyolmo...